Peak climbing in Nepal is the hard-hitting adventurous sport in the Himalayan regions of Nepal. Approximately 1310 well-known peaks above 6000 meters are technical and tough to climb and offer absolutely jaw-dropping Himalayan scenery. Out of the top 15 highest peaks of the world, 8 of them are situated in Nepal including Mt. Everest tallest of all. Though only about 326 peaks of Nepal have been given permission for climbing and mountaineering. So, Nepal is the country that people from different parts of the world would prefer to visit to climb the peaks. Peak climbing in Nepal is rewarded by some heck of mind-blowing views of mountain peaks, icefalls, glaciers, stunning landscapes, and beautiful scenery. Experience the unique lifestyle of the people living in the Himalayan region of Nepal. Risking the life of their own climbers from different parts of the world come to Nepal for the purpose of peak climbing.

The climbing peak in Nepal is so technical so the experience of climbing and skills are the most important thing that climbers should keep in their mind. Everest region, Annapurna region, and Langtang region are the most popular and common trekking trails of Nepal. The most well-admired trekking peaks of Nepal are Island peak Climbing, Mera peak Climbing, Lobuche peak climbing, Pokaldde peak climbing, Kwangde peak climbing, Cholatse peak climbing, Pisang peak climbing, Chulu east  Chulu west peak climbing, Tilicho peak, Tent peak, and many others which offer adventurous and thrilling trekking experience. Most of the climbers may doubt lodges and tea houses in the upper part of the Himalayans but to fill the gap of that doubt quality lodges and tea houses are opened with the best services.  The government has restricted some trekking routes because of the open border, so a special permit is required for climbing some peaks.

Peak climbing in Nepal is done mostly above 6000-meter peaks. So it is very important for the climbers to be mentally and physically fit. Similarly, knowledge and skills of using climbing gears are as important as your physical fitness. Though before climbing peaks, the trek leader will help by giving instruction on how to use gears but if the climber has experience of their own then it will be very easy to climb the peak successfully. Another key thing that climbers should be concerned about is the best time to climb the peak in Nepal. Not all the seasons throughout the year are best for climbing the peaks. The perfect months to climb the peak are September-February. During these months skies are blue with scorching sun and crystal clear views of snowcapped peaks can be witnessed. Snowfall occurs in the higher elevation of the Himalayan region which is the best part of climbing peaks in Nepal. Without any doubt, Nepal is probably the number one country in the world in terms of snowcapped peaks. Some of the popular snowcapped peaks have been described below in brief. 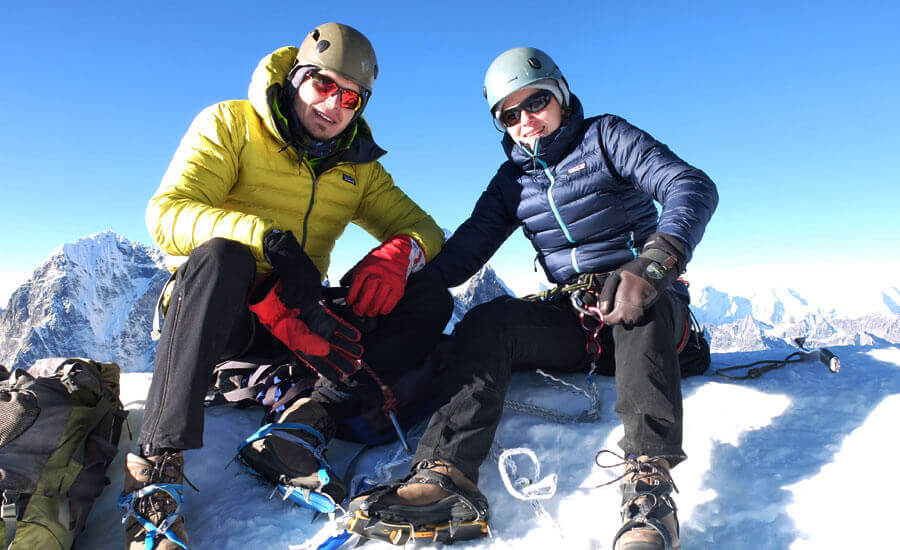 Island peak is one of the most chosen and admired trekking peaks of Nepal situated in the Solukhumbu region at the elevation of 6179 m. This peak offers majestic and close-up views of panoramic peaks like Mt. Everest (8848 m), Mt. Lhotse (8516 m), Mt. Nuptse (7897 m), Mt. Makalu (8201 m), and many more snowcapped ranges. This peak is also known as ImjaTse which offers amusing walks and eye-catching views of the beautiful Everest region. Island peak climbing is not that much difficult physically but technically it is a very challenging one. This trek begins with the scenic flight to Lukla followed by beautiful trails. Trails to this peak are naturally decorated with beautiful rhododendron forest and other flowers. Walking on the route of rocky path and snowy trail, this peak offers adventurous climbing in the Everest region. What makes this peak climbing more interesting is the local people and their culture. During the trial, most of the villages that can be explored are habited by Sherpa people. They have their own unique lifestyle and tradition.

Mera peak is the highest trekking peak of Nepal which rises to the south of Mount Everest and dominates the uninhabited valleys of Hongu and Hinku at the elevation of 6461 m. This peak climbing offers stunning views of snowcapped peaks like Mt. Everest (8848 m), Mt. Cho Oyu (8201 m), Mt. Makalu (8485 m), and Mt. Kanchenjunga (8586 m), and many other small ranges. Mera peak was the first ascent by J.O.M Roberts and Sen Tenzing in 1953 but the proper climbing was made in 1975 by French climbers.  Mera peak climbing is ideal for those who are seeking to stand on the Himalayan summit. Explore untouched and unbeatable natural beauty while climbing this peak. Similarly, explore numerous species of flora and fauna on the trail. The unique culture and tradition of the local people of the Himalayan region can be experienced. 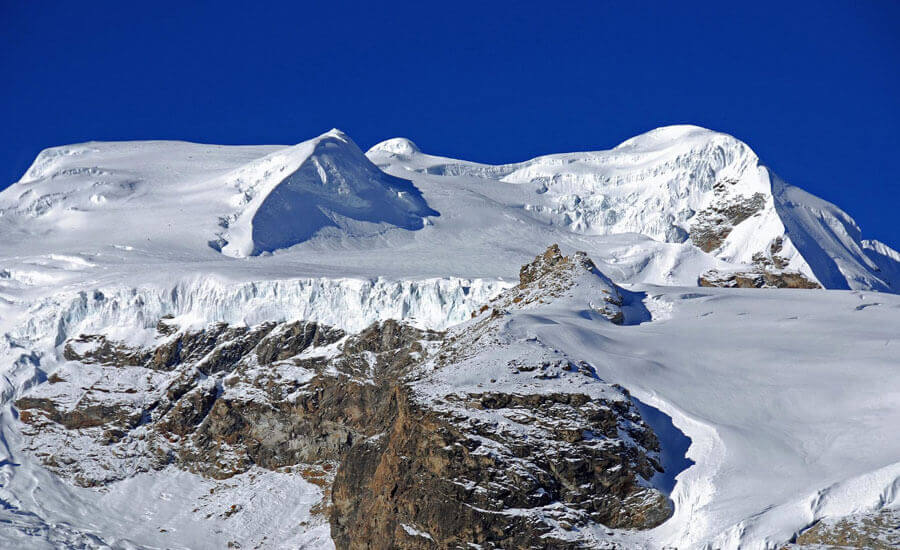 Lobuche East Peak neighboring peak of Mera and Island peak situated near Khumbu Glaciers in the Everest Region at the elevation of 6119 m. This peak is structured as three ridged pyramid which is so charming to watch. Lobuche peak has two distinct peaks as Lobuche East and Lobuche West, both offers stunning climb in the Himalayan region of Nepal. Dazzling views of snowcapped peaks like Mt. Everest, Amadablam, Makalu, Nuptse, Lhotse, and many more ranges can be experienced during the climb of this peak. Labuche peak climbing starts with the scenic flight to Lukla then trekking starts following the trail of Namche Bazaar, Tengboche, Dingboche, Pheriche, and finally Lobuche. The beautiful villages of the Sherpa people are so eye-catching during the trail. The lifestyles, cultures, and traditions of the local people are found totally unique and different from us. This peak is one of the most challenging peaks climbing in Nepal graded as PD+. 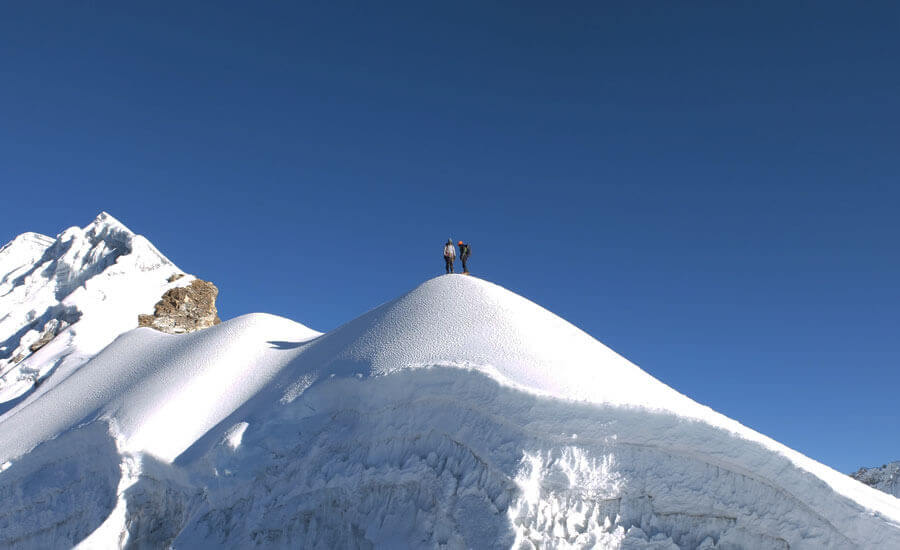 Chulu West peak is one of the challenging trekking peaks that lies in the Annapurna region at an elevation of 6419 m. This peak climbing is ideal for those who have the desire to summit demanding trekking peaks in the Annapurna region of Nepal. Chulu west peak climbing is a physically demanding trekking peak, so to summit this peak successfully climbers should have previous climbing experience and skills to use gears and equipment. Spectacular views of panoramic peaks like Dhaulagiri, Nilgiri, Annapurna, and other peaks can be observed during the climb of this peak. Similarly outstanding views of Tibet and China can be seen towards the northern side of these peaks. Chulu West peak climbing begins from Besisahar and the trail is followed by stunning valleys, villages, and landscapes. Manang valley-one of the highest valleys of Nepal can be experienced during the trial. After summiting this peak, the trail leads back through Thorong La pass (5416 m), Muktinath, and Jomsom. From Jomsom flight will be operated up to Pokhara and then drive back to Kathmandu. 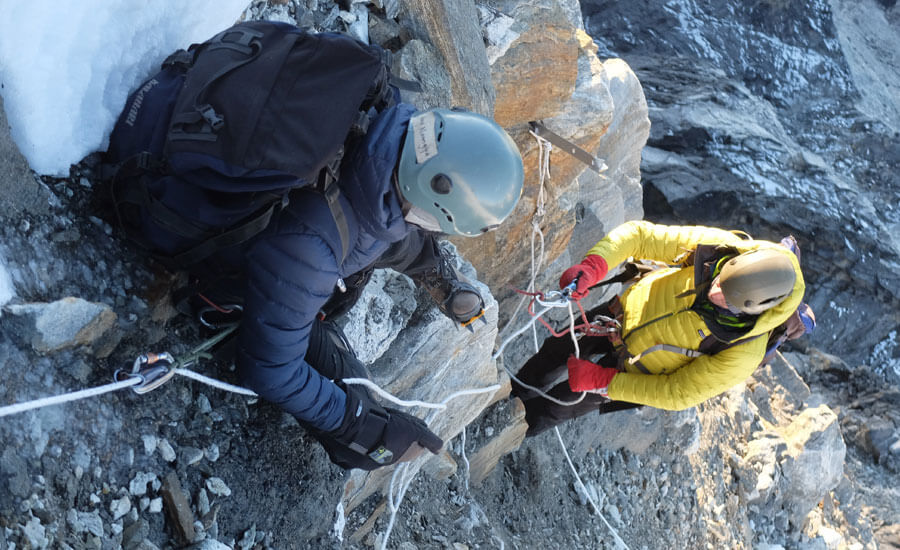 Pisang peak climbing is considered one of the easier trekking peaks in Nepal which is located in the Annapurna region of Nepal. With an altitude of 6091 meters, this peak climbing offers worthy trekking in the famous Annapurna region of Nepal. This easy and worthy peak climbing to Pisang peak is rewarded with varieties of an ecosystem, diverse cultures, stunning landscapes, and beautiful villages. Despite knowing as the easiest trekking peak, a very high level of physical fitness and mentality is required to climb this peak successfully. Summiting Pisang peak climbing offers glittering views of sparkling snowcapped peaks such as Tilicho peak, Annapurna II, Annapurna IV, Gangapurna, and other small ranges. This adventurous peak climbing starts with the scenic drive from Kathmandu to Besi Sahar. Besi Sahar is the starting point of this trek the trail leads us through beautiful villages, landscapes, and forests of rhododendron. After summiting this peak the views around the Himalayan peaks are mind-blowing. Sub-tropical lush vegetation is explored while returning back after summiting the peak. Truly this peak is an ideal choice to experience the beauty of the Himalayan region.