The ‘hidden’ adventure of the Annapurna region, the Upper Mustang Trek is a trekker’s dream destination. Despite being geographically located in Nepal, the region is influenced by Tibetan culture, religion, and festivals. The trek leads towards thousand years old monasteries, dangerous and frightening Gompas. The trek with Adventure White Mountain in March is stunning, leading you on an adventurous lifetime journey to the forbidden Kingdom of Nepal.

Being known as the dangerous adventure of Nepal, trekking to the upper mustang has its own inestimable value and significance. The traditional Tibetan Buddhist art, old monasteries, deep-rooted traditional religion, caste, and culture have made this region shine brighter than any other trekking spot in Nepal.

The Upper Mustang trek stretches from the world’s deepest gorge, Kaligandaki Region, into the world’s highest region of Lo-Manthang valley. For the trek, we reach Pokhara either by bus or by plane. Then, we fly towards Jomsom from Pokhara and head towards Kagbeni, the gateway to Upper Mustang trekking. Exploring Tsarang, and Ghiling, we reach Lo-Manthang. We also explore the holy Muktinath temple. Overall it’s a moderate level trekking and the best way to explore the unique Kingdom of Nepal.

When is the best time to trek Upper Mustang?

This is the most probable question raised by every trekker. I believe that trekking can never be stopped by weather and climate. Take a look back at the history of famous trekkers; they preferred trekking in mysterious and exciting months rather than peak seasons. Besides this, it also depends upon your interest. Upper Mustang can be visited any time of the year. Yes, I’m right even in the cold month-March when most of the popular trekking is not recommended, the Upper Mustang trek is possible. Trekking to Upper Mustang is more beautiful during March. In fact, the Upper Mustang region lies in the rain shadow area of the Annapurna massif which blocks away from all the rain and clouds during the month of March. The main problem during this month is muddy and slippery trails with leeches. This may create a troublesome experience for trekkers. 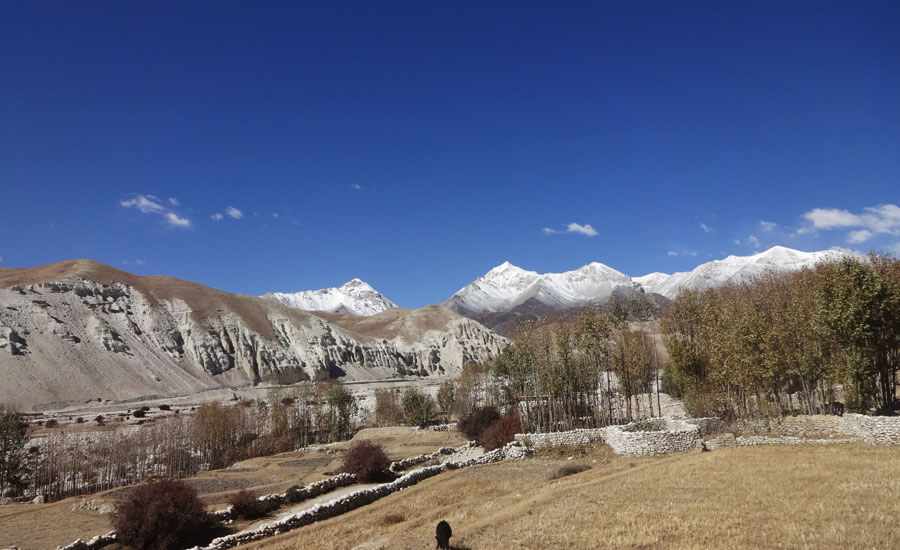 Even though the month falls under the winter season, the days remain warm with clear views of the surrounding. The place is dry almost all year and surrounded by sandy rocks. The day temperature reaches an average of 20℃ and the night to an average of -3℃. Never get afraid of night temperature because your warm clothes, warm tea houses, lodges, and camping make your night a bit hotter than other days.

Wildlife of Upper Mustang during March

The Mustang region is rich in wildlife. During your trial, you may encounter different species of butterflies, insects, snakes, birds, and mammals. Upper Mustang is the habitat for the snow leopard, musk deer, and Tibetan Gazelle. Besides this, the region is rich in medicinal and aromatic plants of very high economic value.

How can an article be completed without Lo Manthang?

Lo Manthang is the Village Development Committee and is the capital of the old kingdom of Lo. It lies at an altitude between 3000m and 3500m. JampaLhakhang, ThubchenGompa, ChodeyGompa, and ChoprangGompa are the four major temples of Lo Manthang. Tiji festival is a popular festival celebrated by the people residing in this area. Probably, it’s the most enthusiastic place for you to trek upper mustang during March.

The crowd is less during March. So, one can have varieties of options for food and can choose tea houses and lodges of your own choice. The price of foods decreases than that of peak months. It’s always better to trek Upper Mustang during March. I think you’re clear about the Upper Mustang trek in March. A real adventurous heart never cares about the weather. Perhaps they are ready to trek any part of the world at any time. And, trekking in such a period becomes more enthusiastic and interesting. Every people trek in the peak season, isn’t it? But only clever-minded people trek during March. Further, If you have any queries regarding this trek and any other trek in Nepal, feel free to contact us any time you like.