Everest Base Camp Helicopter Tour is the alternate fast tour for short time period people who want to enjoy the thrilling and fascinating environment of the Everest region. The Helicopter tour is the best Arial tour to date in the world. Soon after taking off from TIA (Tribhuvan International Airport), we see the diorama of Kathmandu valley, greenery, and small villages.
The helicopter Tour is an expensive tour but virtue every second where you will be compensated with unbelievable views of mountains. This tour starts from Kathmandu Airport, flying east from Kathmandu towards Lukla village which is known as “The Gateway to Everest”. The helicopter lands at Lukla for fuel and eating purposes. Then, it flies to Kalapatter(5545m) where you can get the best view of Lhotse(8,516m), Cho Oyu(8,201m), and hundreds of snow crown apex.

Best Time of the Year

All sorts of the season are a suitable time for the Everest base camp Helicopter tour. However, people feel comfortable from July to October. You can experience the pellucid mountain views of Everest. There is no need to worry about the rainfall. Most people enjoy the synopsis during rainfall time. They forget their pain, their solitary life during the rainfall time in Helicopter Tour. Daytime is comfortable for helicopter tours during the winter season because the night is too cold. March to October can be the best time for a Helicopter tour because this is the ideal period to see other mountains, wild animals, flowers, Everest, etc. 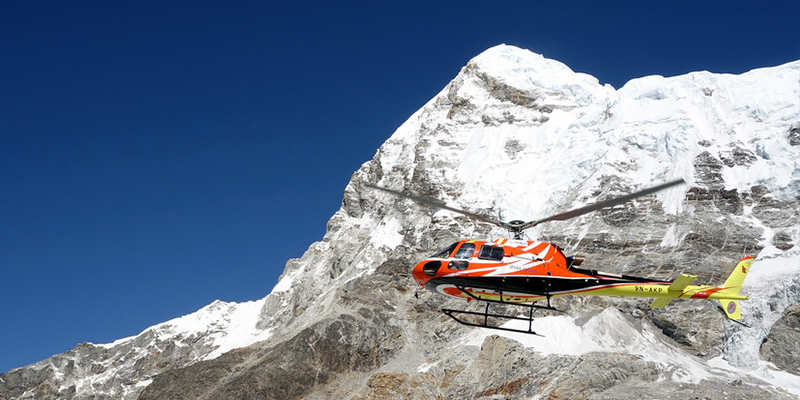 Everest Base Camp Helicopter tour in September, October, and November

Winter is immensely crisp in the Everest region. However, it is suitable for the helicopter tour. You are supposed to wear thick clothes if you have planned for the tour this season. During night time the views of mountains and scenarios can’t be seen properly but during the daytime, the weather looks stunning. The temperature falls to the minus degree but there is nothing to worry about the temperature for the helicopter tour.

Everest Base Camp Helicopter tour in March, April, May, and June